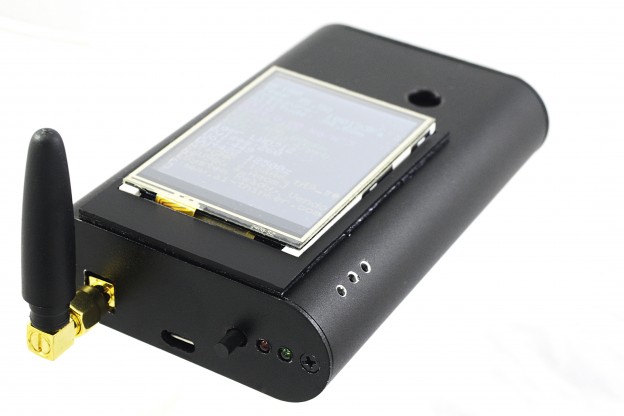 The uRADMonitor-D, also known as the Portable Environmental Monitor is a powerful handheld unit equipped with advanced sensors to detect and warn against hazardous airborne substances. Three Beta stage prototypes are currently in transit for the Hackaday Headquarters to be part of the Hackaday Prize 2015 competition. Fingers crossed, winning this would boost the uRADMonitor network to a new level of complexity.

The devices are small and compact and can fit the palm of your hand with ease, allowing to take them wherever you’re concerned about the quality of the environmental parameters. The units feature the sensitive LND712 Geiger tube capable of detecting alpha, beta and gamma radiation. Then there’s the MiCZ-VZ-89 sensor to map the CO2 and VOC (Volatile organic compounds) concentrations. A dust sensor will show you how clean the air surrounding you really is, while a temperature and pressure sensor will complement the collected data.

The units have both local connectivity over USB, but can also connect to the internet via Wireless LAN. So you can get rid of the cables if that is what you want. Readings are shown as charts, and there are alarm functions with configurable thresholds for any of the parameters measured. The Video shows an example with radiation. You’ll never be taken by surprise when your health is affected. The Wireless LAN will centralise all data to the uRADMonitor Global Radiation Monitoring network. The USB can be used for local automation systems, but also for sending terminal commands to the unit.

Complete details are presented here. Don’t forget to vote for the project on the Hackaday page!